COVENTRY, UK: 11th July 2016: A project worker from local charity KairosWWT has been praised for her professionalism in a serious case review (SCR) carried out to investigate the background to the child sexual exploitation of five young people in Coventry in 2012. 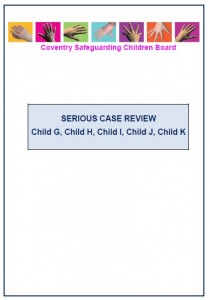 Published today, the SCR outlines how the five young people experienced violence, intimidation and sexual exploitation over a considerable period of time, and focuses on what can be learned in order to improve Coventry’s response to young people at risk of CSE.

The SCR acknowledges that the work carried out by a group of voluntary sector organisations – KairosWWT, The Children’s Society, CRASAC and COMBAT – was instrumental in recognising that CSE was taking place and that they began the collection of relevant data which was passed onto the Police PPU for action.

Specifically, the SCR outlines that:

In response, the KairosWWT worker who supported one of the young people comments:

‘This report highlights again how important it is to listen to young people and value their voices. I strongly believe in a relationship based model and advocate its use to underpin the practice of all professionals working in the field of CSE’.

‘We are pleased that the SCR has recognised the expertise of the voluntary sector and commend our worker for her professionalism.  We also welcome the acknowledgement that multi-agency responses must include everyone who has contacts with young people at risk of CSE and we look forward to future collaborative working with the statutory sector.

The SCR also points out that services tend to drop off for young people once they reach 18 and we have responded to this by developing our Feeling Safe service for young women aged 18-24 who are at risk of or affected by sexual exploitation.  This service supports young women to recognise sexual exploitation, identify risks and seek help when needed. For more information please contact Jenny on 02476 559550.’

‘This report adds to the growing number of publications around CSE that recognise the difficulties in adequately safeguarding young people. We evidenced our concern for CSE within Coventry back in 2012 and we continue to raise awareness of and provide support for women over the age of 18. The impact of sexual exploitation does not simply stop because a young person reaches their 18th birthday and can, and does, reverberate into adulthood. Our hope is that the recommendations help professionals across all sectors to be better equipped to recognise the signs and symptoms of sexual exploitation and that practices which foster victim-blaming are eradicated.’

You can listen again to Dr Osmond and Lucia Leon talking to Jo Tidman and Trish Adudu on BBC Coventry & Warwickshire Breakfast: